How to Transfer Music from iPod touch to Samsung Galaxy S7

Of course, to start with, we need to draw support from this handy third party tool: Syncios Data Transfer, which can be your best choice to transfer all your data like contacts, text messages, call logs, photos, music and so on just in ONE CLICK, moreover, it supports multiple platforms, android to android, iOS to iOS, android to iOS as well. Simply download and install Syncios Data Transfer on your computer from (both Win version and Mac version):

Connect your iPod touch and Samsung Galaxy S7 or Galaxy S7 Edge to your computer/Mac with USB cables and launch Syncios iOS to Android Data Transfer. Then select "Phone to Phone Transfer". Check the "Music" to transfer from your iPod on the checkbox. Then, click Start Copy to sync music to the Galaxy S7.

Literally, the Galaxy S7 would be showed in right panel. You can click on "Flip" button to exchange the source and target device . And you can click here to learn what other types of data are supported to be transferred between iOS and Android devices. 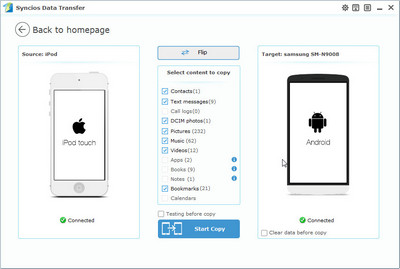 The transferring process would be launched automatically. When the transfer progress is over, click "OK" to end it.

Besides, you can rest assured that the quality of songs on your new Samsung Galaxy S7 is as good as it is on iPod touch.

Tips: Please assure that both of your devices are connected well with your computer in case of some unknown error occurred.